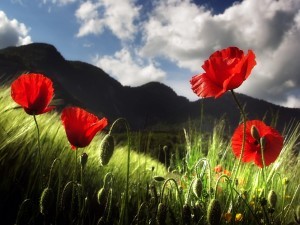 My Mom often said she wanted to write her life-story, though never seemed to have time. Life was busy: getting a dairy farm established in Niagara after immigrating from post-WWII Europe, raising 7 children, along with commitments to church, and involvement with school and sports for us kids.

She did make time to write monthly hand-written letters to family overseas, until her own mother in Europe passed away.   I’ll never forget when my Mom returned from the funeral. Along with her luggage was a box of letters: the very ones detailing, page by page, the events of her life in Canada.  “Here’s your story!” we said.   And because it was in her native tongue, we hired someone to help translate, expand, and edit them all into a seam-less narrative.

We’re blessed now to have her life captured in book form.  One chapter tells of her Father missing-in-action after WWII’s Battle of Grebbeberg, the joy of finding him wounded in hospital, but also the grief and sorrow of hearing how three of his brothers were still missing, and never found.  This honest, grief-filled chapter makes me mindful how so many blessings we share today would not be ours without the sacrifice of those going before us.

I often encourage others to write their life-story.  Family stories shape and ground us.   Stories which are honest about joys and sorrows help us remember precious and fragile life is. Eric Metaxas, an American-born post WWII author, has done a great service in writing the story of a martyr named Dietrich Bonhoeffer, a young German who helped orchestrate the Valkyrie plot to take down the Nazi leader.  Bonhoeffer was a Christian, who challenged many in his German church to stand up for the faith passed down through generations.   Through folly or fear, many bowed to a ruthless regime, which  eventually took the lives of countless people, including Bonhoeffer.    His story, and that of many others, is worthy to remember.

November 11 calls us to reflect on the price others have paid to give us freedom.  To keep their stories–and our very freedom–alive, find a seasoned or recent veteran willing to share.   Watch a movie giving an honest and gritty portrayal of war.  Read a story of sacrifice.   Or consider writing yours.   Lest these important parts of our story are forgotten.

Aug 7
Communion for a Community