Chapter Six of the Book of Esther 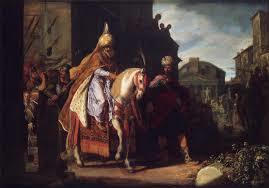 A new word was invented at the Wednesday Bible Study this week, compliments of group member Denise Losier who came up with “Mordecaied” to describe the humiliation of the book of Esther’s villain.

Poor Haman.  By the time we got to the end of Chapter 6 of the book of Esther we were almost feeling sorry for the evil fellow.  At the start of the chapter, Haman is riding high; he’s the chief bureaucrat in the land, he’s well on his way to ridding himself of the Jews, and he’s been invited to not one but two banquets given by the queen.  By the chapter’s end he’s been shamed, humiliated, publicly embarrassed, and “Mordecaied.” How could such a thing happen?

It all starts with the king having an attack of insomnia.  After all, as Shakespeare said, “uneasy lies the head that wears the crown.”  Instead of counting sheep he has the annals of the kingdom brought out of the vault and read to him, and what does he hear, but an account of the time Esther’s cousin and guardian Mordecai saved him from a palace plot.  Yet he’s never been rewarded for saving the king’s life.  Something has to be done, but what?

While he ponders all this, in comes Haman who wants to talk to him about hanging that very same Mordecai on the gallows he’s had built out in the courtyard.  Before he has a chance, the king asks him for suggestions on how to honor someone he holds in high favor.

Haman in his arrogance assumes the king is talking about him, and comes up with the most elaborate and public exaltation he can think of.  Imagine his surprise and horror when he learns that it’s Mordecai who gets to wear the royal robes and crown and be paraded around the city on the king’s own horse.  And as if that isn’t bad enough, Haman has to lead that horse and proclaim his arch enemy’s favor with the king.  Haman is well and truly Mordecaied.

After that awful day he scurries home, too ashamed to show his face in public and it’s there that he gets a dire warning from his wife and advisers: “If Mordecai, before whom your downfall has begun, is of the Jewish people, you will not prevail against him, but will surely fall before him.”

There’s some foreshadowing going on there.  Nor is that the only literary device used by whoever it was who wrote this book. One thing we have noticed and discussed at length this week is the superb storytelling of the unknown author.  One member of the group compared it to a well-structured Netflix series, or a book that you can’t put down.  There’s mounting suspense as the story unfolds, twists and turns in the plot, and a payload of irony that really came out in this week’s study.

It’s a fun chapter for the reader, where Haman’s arrogance and self-interest ends up honoring the man he hates.

The description of a fool in Proverbs 26 can certainly be applied to Haman, who becomes the author of his own destruction.  Karma might not be a Biblical term, but it fits this story.

The chapter ends with Haman being hurried off to Esther’s second banquet, which is going to be very different from the first one.  The king hasn’t connected the dots on what’s going on yet, but when he does Haman’s hatred for the Jews will bring him down

It’s a reminder that God is at work even in the lives of those who rule over us.