Chapter Seven of the Book of Esther 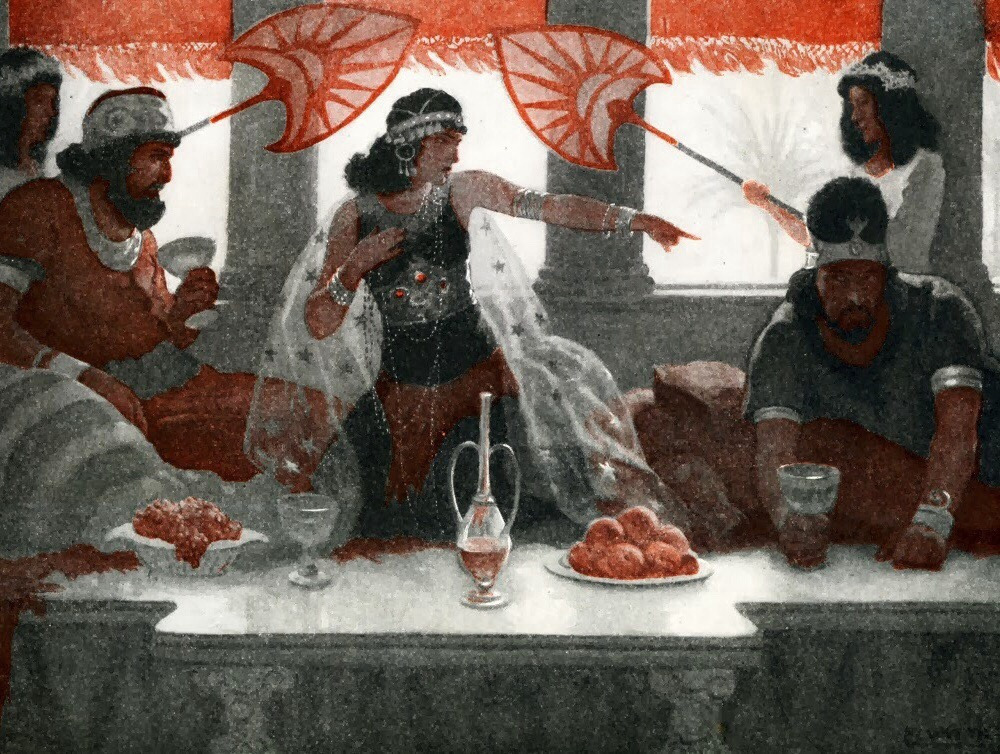 Never let it be said that Haman wasn’t thorough.  When he built the gallows for Mordecai, he had it built 75 feet high.  While that may seem a little excessive, he wanted to make sure that the execution of the man he hated, the man who refused to show him the proper respect, the man he had to lead around town on the king’s horse was not only final, but public.  How ironic then, that it’s Haman, the villain of the book of Esther who ends up on the scaffold in this most public of his humiliations.

As we’ve noticed before, there’s irony upon irony in the telling of this story, all coming together in chapter seven as Esther finally reveals her identity.  This is the climax of the whole story, a moment of high drama as Esther points her accusing finger at the enemy of her people, and all the dominos fall into place.

The scene is Esther’s second banquet for Haman and her husband the king as Ahasuerus asks her what she wants.  He’s completely in the dark about what’s been going on but he knows she wants something.  Haman is also missing some key information.  For all his plotting and scheming, he doesn’t know that Esther is related to Mordecai, or even that she’s a Jew.  He’s about to find out, because what is Esther’s request of the king?  It’s for her life, and the lives of her people.  If they’d only been sold into slavery, she wouldn’t have bothered him, she says, but this is serious.

Who’s responsible for this, the king wants to know.  And it’s here that Esther points at the cowering Haman, who has just realized the jig is up.  The king leaves the room in a rage to pace in the palace garden, and Haman throws himself on Esther, begging for mercy. The king comes back just in time to witness what looks like Haman assaulting his queen, which makes him more furious than ever.  It’s quite a scene.  “Will he even assault the queen in my own presence, in my own house?” he thunders.

A eunuch steps forward and helpfully points out the 75-foot gallows Haman had built for Mordecai, “whose words saved the king.”

“Hang him on that,” says Ahasuerus, and Haman is hauled away to his doom, after which the king finally calms down.

The group discussion revolved around the reaction of the king and the mayhem that followed.  The king’s fury has a lot to do with his ignorance of what Haman has been up to.  He’s been played for a sucker, approving the genocide of an entire group of people to fulfil one man’s evil schemes.  Does he even remember doing it?

There’s divine justice at work here. Galatians 6:7 says, “Do not be deceived; God is not mocked, for you reap whatever you sow.”  Or, what goes around comes around, hence the irony of Haman literally building his own gallows.  It’s a reminder that this is a biblical story, even though it doesn’t always sound like it.

Esther’s reference to slavery as being not so bad a fate as what Haman had planned for her people would have been a nod to Jewish readers, remembering their deliverance from Egypt.

The story at this point reads like the climax of a Shakespearian tragedy.  All that’s left is the mopping up, the dragging away of the bodies littering the stage, the final epitaph.  But wait!  There are still three more chapters to go.  Granted, one of them is really short, but there’s still the law of the Medes and Persians, that cannot be repealed.  The Jews are still in deadly peril.  The story isn’t quite over yet.  Tune in next week for the denouement.