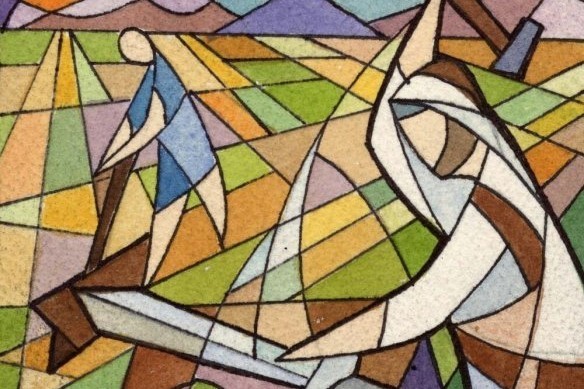 Things are really heating up for the Prophet Joel whose visions for the people of Judah have taken a new turn, and it’s not going to be happy days for the enemies of God’s people.

Joel is a short book, but he packs a lot into three chapters.  This week the first part of Chapter Three continued Joel’s look at the Day of the Lord with a side trip to the Valley of Jehosophat.

The whole tone of the book has changed; earlier weeks saw Joel bemoaning the rebelliousness of God’s people and calling for repentance.  The plague of locusts in Chapter One and the images of war and destruction in Chapter Two were all directed at Joel’s countrymen.  By Chapter Three though, it has become clear that God has not abandoned his people.

The Day of the Lord is no longer directed at them but at their enemies, and that Day is Judgment Day.    Joel is no longer the voice here: he’s quoting God directly, when he says,  “I will gather all the nations and bring them down to the Valley of Jehosophat, and I will enter in judgment with them there, on account of my people and my heritage Israel.”

God has finished his reckoning with the disobedient people of Judah.  Now he’s about to turn his attention to their persecutors.  Every torment and outrage inflicted on them by Tyre and Sidon and the Philistines will happen to these enemies as he rouses his people to action.

Jehosophat was a king of Judah whose name means “God shall judge.”

That warlike imagery set off a lively discussion that ranged from Isaiah’s prophesy of beating swords into ploughshares instead of the other way around, to the New Testament where Jesus talks about turning the other cheek.  Then it veered off into Paul’s admonition to “put on the whole armour of God” and ended up with wondering if we should be singing “Onward Christian Soldiers.”  It was very interesting.

There’s a lot of metaphor here.  By the middle of Chapter Three, in this penultimate look at Joel, the prophet is winding up for his big finish.

Next week, we’ll find out what he finally has to say about the future of Judah in “That Day.”   After next week we will be starting a new study.  We meet by ZOOM Wednesdays at 11.  For instructions on how to join, contact Pastor Jim (pastor.jim.pot@rogers.com).