Joel Wraps it Up 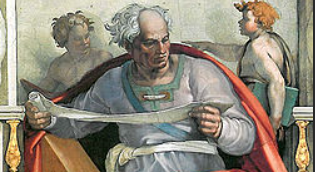 It started with hand-wringing over a plague of locusts, moved on to warnings of destruction, morphed into repentance and forgiveness then finally wrapped up with bombast and vivid imagery.

“The day of the Lord is near in the Valley of Decision,” thunders the prophet Joel in his grand finale.

“The Lord roars from Zion, and utters his voice from Jerusalem.”

It’s great stuff, and it was that imagery that caught the attention of Wednesday morning’s Bible study participants as Joel ended his prophecy on a high note for God’s people.

The discussion quickly got into how to look at that imagery, and the difficulties of interpreting ancient texts.  When he says God will dwell in Mount Zion (which is just outside the walls of Jerusalem) what does he mean?  And what about those mountains dripping with wine and hills flowing with milk?

There are pitfalls in interpreting these metaphors too literally, where they end up being used for political purposes.  If you look at the narrative of Joel in the Presbyterian and Reformed viewpoint, said Reverend Jim, you can see a summary of the message of the Bible.  Mount Zion is a historic religious symbol of God dwelling among his people.  This last section of Joel shows how an Old Testament prophecy can have a New Testament interpretation, with Jesus as God’s manifestation in the world, dwelling among his people.

Joel ends with a glorious future for God’s people, but with Jesus, who is greater than Jerusalem we don’t have to think about God coming down on one particular mountain.  All those forgiven in Christ can see themselves with him.   Next week we start on the historical book of Esther, the Jewish queen of Persia who saved her people from destruction.