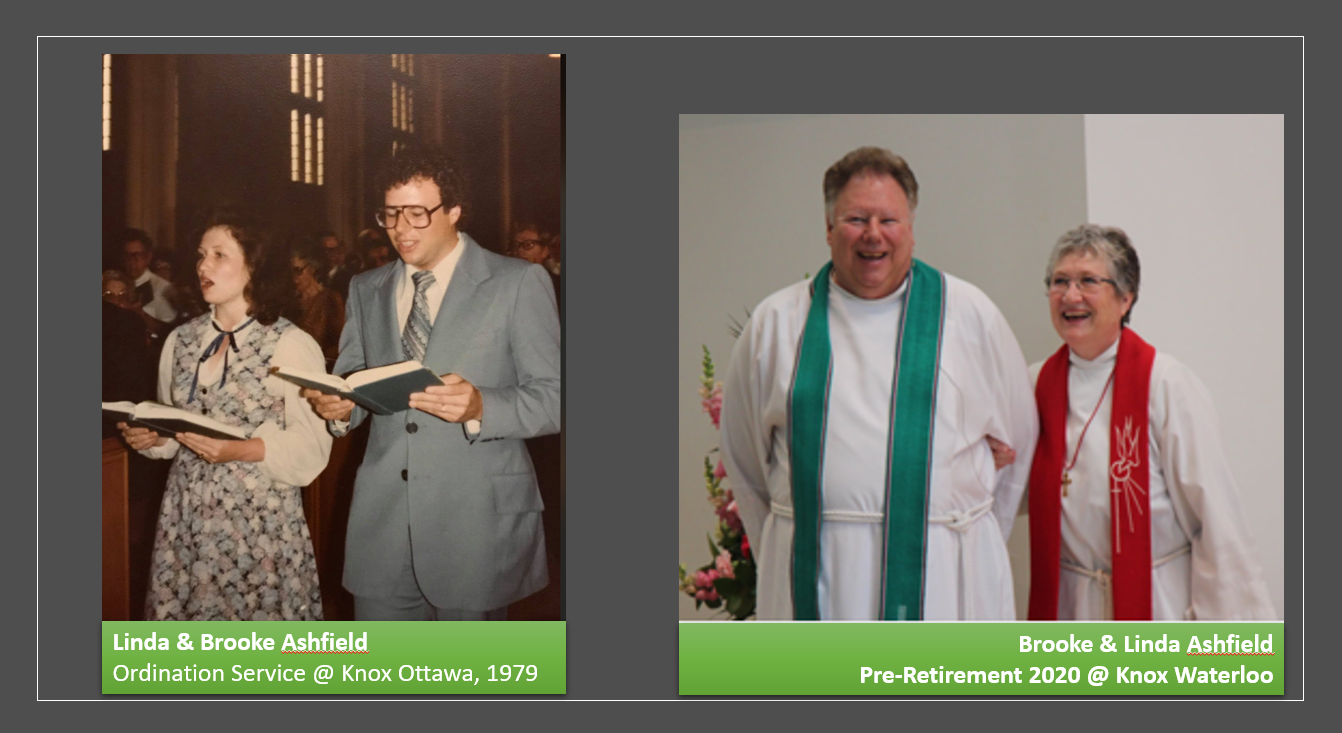 To many of us, the region of Waterloo, ON., is best-known as a technology hub, home of Blackberry (formerly Research in Motion), the international enterprise software company, and two dynamic universities: Waterloo and Wilfrid Laurier.

What’s not so well known is that Knox Church in the heart of Waterloo has, for the past three decades, been served by the only Presbyterian husband and wife ministerial team in the country who were also ordained together.

In fact, some of you reading this may have been in the pews here at Knox Ottawa for their joint ordination some 41 years ago. We’re speaking of Reverends Linda and Brooke Ashfield, two go-getters who will be sorely missed upon their retirement from ministry which is being celebrated this Sunday, Sept. 27.   Naturally, the event originally planned to usher Brooke and Linda into blissful retirement has had to be toned down due to covid, but there will still be a Special Sunday worship service along with several guests, music and a lot of fun.

Says Linda: “We’re looking forward to it. It’s important for us to say goodbye and also for the church to say goodbye to us.”   There is a close and abiding connection between the Knox-Waterloo Ashfields and the former Knox-Ottawa Ashfields. And they had strong family ties to Knox Ottawa, some of which continue today. Theirs is a story you won’t hear very often.

Both Brooke and Linda grew up in Knox Ottawa and met here; both were baptized here, did their Profession of Faith here and were married at Knox. To top that off, they hold the distinction of being the first couple in the Presbyterian Church in Canada to be ordained together, again, at Knox Ottawa, June 10,1979. And so began what would become a future of joint ministry for the couple.

Brooke and Linda began their tag team ministry at Gateway Community Church in Flemingdon Park, Toronto, where they served until 1989 when they were called to Knox Waterloo. Prior to that they had separate charges, also in Ontario. Working as ministers in the same church was never a problem, says Linda.

“Brooke and I did all the duties of the minister--preach, officiate the sacraments, weddings, funerals, pastoral care, moderate session and so on. We both were involved in every Sunday worship, however, the person preaching for the day organized the liturgy, and decided what the other minister would do.”

“Gateway was immensely satisfying,” says Brooke. “It was multi-ethnic, everyone was a minority and we really loved our time there.”

Regardless of where life took them, both Linda and Brooke credit their formative years at Knox Ottawa as crucial to their approach to life and ministry over the years.   Both the Ashfields say that one of the strengths of Knox Ottawa was how the Church treated its children and young people.

“They did a great job of making us kids feel loved and welcomed,” Linda says.  “And there were literally hundreds of kids running around there at that time.”

The love for and encouragement of children, and an openness, acceptance and welcome to all people are tenets the Ashfields have nurtured throughout their tenure at Waterloo.

“It’s really hospitality,” says Brooke, “which is at the core of the Gospel…making the extra effort to welcome people.”   “There were so many people at Knox Ottawa who nurtured us and helped us grow in stature and wisdom as we grew in our faith,” says Linda.   That kind of welcoming ambiance is something Linda took from Knox Ottawa and never forgot.

“You know, it doesn’t matter how many kids you have in a congregation at a given time. What matters is that Knox Ottawa knows the importance of the kids - like Brooke and I who grew up there, and like those growing up in their midst now.”

Highlights are many when you’ve served a congregation for 30-plus years as the Ashfields have in Waterloo.

For Brooke and Linda highlights have included bringing new approaches to staffing there, investing in kids, including bringing in the LOGOS ministry from the States and adapting it for Canada; developing ministries run by lay people of the church which means getting to know what peoples’ gifts are and helping them apply them within the church and beyond the church building.

Speaking of buildings, it was about nine years ago in June that the inaugural worship service took place in a brand-new Knox Waterloo Presbyterian Church. Plans to replace an aging structure short on amenities and space and long on structural issues actually started some 10 years earlier. It’s another high point for Brooke and Linda… a beautiful and practical example of what can be achieved with the right approach, the right attitude and the right people.

“We had a five-person building committee who had to make all the critical decisions,” Brooke says. I was on that committee while Linda was looking ahead to create the teams that would decide what new ministries and programs we would present in this great new building.”

And it is a great building as you’ll see if you take the virtual tour on their website. [email protected]   As superb and functional as the new Knox is, Linda says it’s not the most important legacy they leave.

“For me, it’s about what we’ve been able to accomplish…with help from many others of course…our core values, creating a safe place for everyone to attend - and that means everyone.  If you’ve got a sign that says everyone is welcome, you better be able to demonstrate that and I feel we’ve pushed the envelope of what it means when you say, “’all are welcome.’”

It’s gratifying to be recognized for your work and although neither Ashfield mentioned it, in 2014 Knox College honored Brooke and Linda with the Distinguished Leadership Award “for their unique and outstanding service and accomplishments to the church and society."

On remembrance of Knox Ottawa, Linda speaks for herself and Brooke when she says, “we have always treasured our memories of Knox Ottawa and we always will.”

There’s little doubt the feeling for Linda and Brooke at Knox Ottawa is mutual.