Thoughts on the One-Man Church Service

…a work in progress 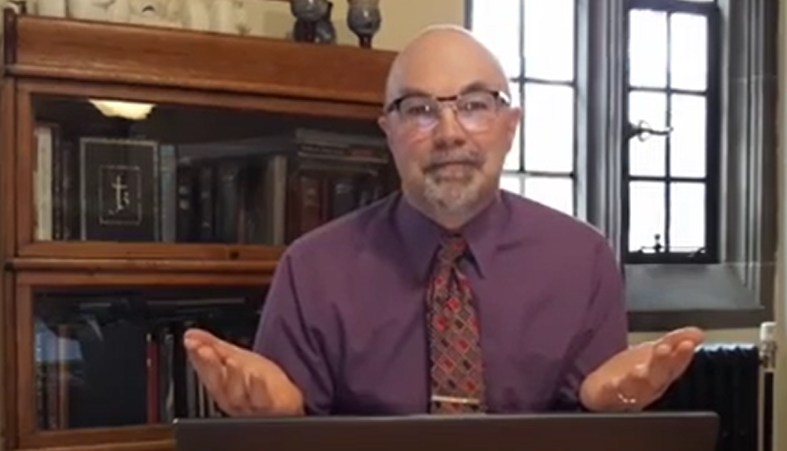 Over the last three Sundays, members of Knox have wondered what, if anything, to expect from church leadership regarding Sunday worship.  They’re not the only ones.  For our Minister, it’s been a work in progress, sorting out what works best.  “It’s a strange feeling, talking to a camera,” says Reverend Jim.

It was especially strange in his first service of the pandemic, preaching to empty pews in an echoing sanctuary.  Even with Caroline Johnston singing, Simon Pinsonneault on the organ, and Ernest Ruppenthal on the camera “it was very odd, talking in an empty place where there are usually people.”

A week later, the second online service for Knox was all ready to go ahead when it collided with the Premier’s lockdown decree.  Everything was ready, the congregation had been alerted, but it never happened.  (“It was a tough day for me,” Jim says.)   Then it was week three, the Palm Sunday message from the Minister’s office, with only videographer Ernest Ruppenthal and the camera for company. “That felt a little less unreal than gazing out at an empty church.”

But, how were people reacting?  Were they paying attention?  Were they distracted by happenings at home?  How long should his talks be, considering peoples’ attention spans?  And was the quality of the broadcast itself good enough?

Reverend Jim has taken note of what other churches are doing.  There are some great ideas out there, and big churches with lots of resources are able to come up with some pretty impressive productions.  But after three-plus weeks in this strange new liturgical reality, what it has come down to for Reverend Jim is to keep the Sunday presentation as simple and uncomplicated as possible. “I think one of the dangers of doing services online,” he says, “is you can get too focused on the production, when what you want is a time for worship for everyone involved.  Just because the church down the street does something, doesn’t mean we have to.  We want to make it real for what and who we are.”

So, here’s what to expect as we go forward:  Sunday messages will continue to come from the Minister’s office at 11 am.  They will probably be pre-recorded so that everyone on the Internet will be able to access it at 11 a.m. not just people with Facebook. There may be a little more interaction; more people involved. Remember, it’s a work in progress.

So, keep watching this space for further information, and we’ll see you Sunday.