Who does what at Knox

The Chair of Temporal Board 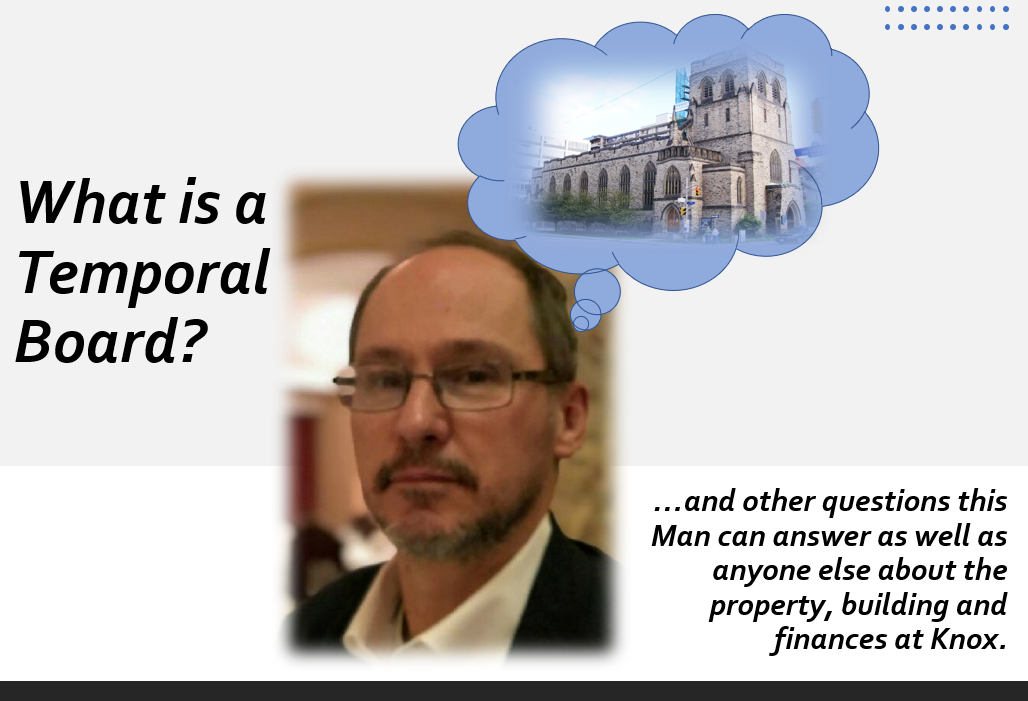 Tucked away as we are in isolation, unable to meet and greet each other in person, the Knox website is a reminder that the work of Knox goes on, and will continue to do so after this pandemic is over. In the meantime, here is an opportunity to find out something about the people who do that work.  How much do we know about who does what at Knox?  This week: Scott MacKenzie, Chair of Temporal Board.

Scott MacKenzie took over the post of Temporal Board Chair in a roundabout way in 2013.   “It was only supposed in an interim capacity; so a brief tenure, ” he said.

As it turned out, it was a lot longer.  At the time he’d been a member of TB as he likes to call it since 2007 and was considering coming off the Board.  “From 2007 to 2013, I was mostly the infrastructure guy.  If the boiler blew I handled it from a TB perspective,” he said.  “To achieve these ends, I worked with a capable little ad hoc group which focused on energy and efficiency at Knox. We did a lot of work to improve infrastructure.”

Despite considering a departure from TB, the opposite happened, said Scott.  “I became the Chair.  Yikes. In 2013, it seemed that the wheels came off at Knox.  We lost the organist, the admin assistant, the minister; then the TB chair, treasurer and secretary left all at once.”

Scott describes that year as “a perfect storm”. In other words, it was a very difficult year for Knox.  Scott was in his home province of Prince Edward Island when the email containing three TB resignation letters arrived “I was parked in my car in downtown Charlottetown and I said, ‘Someone from Session is going to call and ask me to take over as Chair of TB.’”

He was right; someone did.  But at the time he felt he was too busy to take on the job.  Scott is an aeronautical engineer with the Department of National Defense.  “I was busy with a new satellite program and I just didn’t think that I could take it on.”

Nevertheless, that fall he became the interim Chair of Temporal Board at Knox.  “I was Interim Chair for the longest time,” he said.  “Then finally I just dropped the ‘interim’.”

Under Scott, TB came back fairly quickly as a stable board, with members with strong skills.  It was, and is a very busy board.  As Scott describes it, TB is responsible for three areas: finance, which involves setting the budget and reporting on the financial affairs of the church; operations, which takes care of the day to day goings on, and infrastructure. “The infrastructure piece really consumes a lot of time, said Scott.  “Knox is an elegant building, but it was built in 1932.  It’s very expensive and complicated to maintain.”

Not long ago a team of architects and structural engineers went over the whole church and drew up a building envelope study, prioritizing what has to be done to the exterior over the next ten years.  The immediate preoccupation is with the crumbling masonry on the flying buttresses that support the tower.  It’s become a safety issue.  “Stones from flying buttresses landing on the roof or the ground isn’t acceptable,” said Scott, putting it mildly.  “We did temporary repairs in 2019; but we need a permanent fix in 2020 – and we need to achieve success before the cold weather arrives in the autumn.  So mobilization must start very soon.”

Temporal Board has made its recommendations to the Contingency Committee and Session, and masonry work on the buttresses is expected to start in July.  By early-Autumn, the crumbling stonework will be repaired and secure and ready for winter.  By then it’s hoped that the restrictions of the pandemic will have eased enough for an Annual General Meeting.  In the meantime, “we need to take decisive actions and address the structural issues,”  said Scott.

Pandemic or no pandemic the work of Temporal Board goes on.  There are six people on the board where there used to be seven or eight.  Board members are Tom Burnie, Andrew Fay, Denise Losier, Elspeth Paulin, John Young and Scott.  Elspeth Paulin, from Session, is a new addition.  But, there is a need for new members.  “TB’s not easy,” said Scott. “and the building places a lot of responsibility on the board.  This work needs to be done and additional participation would be most welcome.”

Another opportunity for someone with a certain skill or experience, or interest in Knox to come forward and get involved.