A Wakeup Call for the Queen of Persia

Chapter Four of the Book of Esther 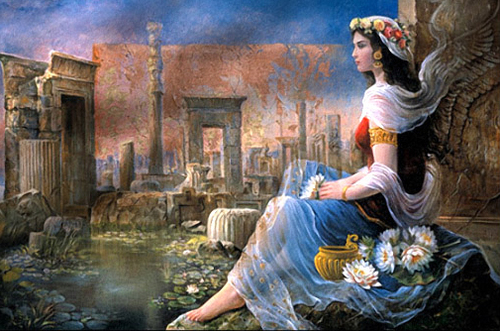 It’s sackcloth and ashes time for the Jews in the Persian Empire.

After a summer break, the Wednesday morning Bible Study returned to the story of Esther at a critical time for the queen and her people.  When we left off a month ago, the proclamation had gone out for the extermination of the Jews at year’s end.  Understandably, the Jews were in a terrible state of agitation.

As we get into chapter four, it quickly becomes apparent that Esther seems to be the only Jew in the empire who doesn’t know what’s going on.  Sequestered away in the harem, surrounded by her attendants, the queen is blissfully oblivious to the political machinations that are about to bring her people to ruin.

Then she finds out that her foster father Mordecai is outside the palace covered in sackcloth and ashes.  She sends her eunuch with a change of clothes, but Mordecai sends back a copy of the death notice for the Jews and tells her to do something.  Esther responds with a what can I do?  I haven’t even seen the king for a month and if I go there without being invited, I could be killed.  Which says a lot about the relationship between the king and his wife.

But Mordecai is not to be put off. Don’t think you’ll escape just because you’re the queen, he warns. What Mordecai says in verse 14 turns out to be the key to the whole story: “If you keep silence at such a time as this, relief and deliverance will rise for the Jews from another quarter, but you and your father’s family will perish.  Who knows?  Perhaps you have come to royal dignity for such a time as this.”

It’s a wakeup call for Esther, and she responds.  She sends word to Mordecai to get together with the Jews of Susa and fast for three days and she’ll do the same with her attendants. Then she’ll go to the king.  “And if I perish, I perish.”

There was much discussion about what this part of the story tells us. In Mordecai’s challenge to Esther, suggesting that she’s been put in her position for a reason, there’s the implied reference again to a Supreme Being.

This leads to the broader reminder to all God’s people who find themselves in a certain situation or at a certain time.  Being God’s instrument means not sitting back.  Sometimes you have to do something.  It can even mean civil disobedience.  Esther is quite clear that she is going to the king even though it’s against the law.

Will the king hold out his golden scepter, sparing her life?  Next week, Chapter five of the book of Esther.  Anyone wanting to join in the discussion can contact Pastor Jim at (pastor.jim.pot@rogers.com).

Heaven's Kitchen Awards Out Of The Cold 25th Anniversary