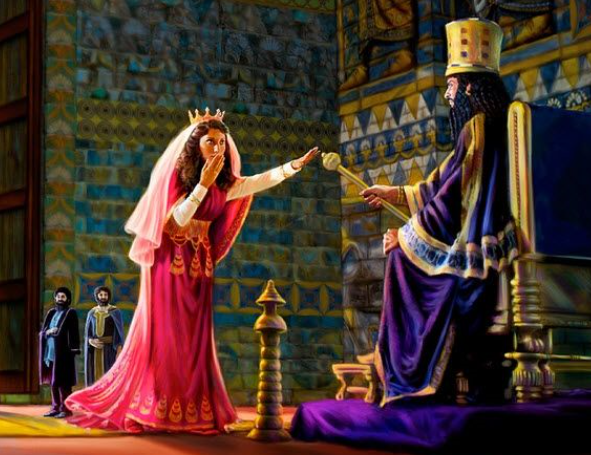 It was a tale of opulence, ostentation, over-indulgence, overweening pride and outrage, and that was just in the first 12 verses.  This week, the Wednesday morning Bible Study group (numbering eight) turned its attention from prophecy to history as we started a new study on the Book of Esther.

Esther the title character doesn’t appear in Chapter One, but the scene is being set for her arrival.  The story opens in the court of the Persian King Ahasuerus (Xerxes to the Greeks), the absolute ruler of the super power of its day.  We are told in the very first verse that the king ruled an empire that stretched from India to Ethiopia.  The King is throwing a banquet for his ministers, officials, nobles, and provincial governors, not to mention the army of the Medes and Persians.

There is no shortage of pomp and circumstance and the King is clearly showing off his wealth and power in an over-the-top display of splendor.  Whoever is writing the story appears to have been there because of the detailed descriptions of everything right down to the curtain ties (fine linen and purple), the flooring (a mosaic pavement of porphyry, marble, mother-of-pearl and colored stones), and the one-of-a-kind goblets.  There is also, we noticed, a hint of sarcasm, even cynicism in the author’s description of the excess, suggesting that he may have been an observer rather than a participant in all the hyperbole that was going on.

As if this isn’t enough self-promotion, at some point Ahasuerus decides to send for his Queen, Vashti, to show off what a beauty he has for a wife.  Vashti, who is busy holding a banquet of her own for the ladies, refuses to appear at what is probably by now a well lubricated roomful of men, and the stage is set for the entrance of Esther into the story.

That takes us up to verse 12.  The rest of the chapter (13-23) is the fallout from the Queen’s defiance.  The King is outraged at not being obeyed (not to mention publicly humiliated); his advisors assure him that this is a dangerous precedent for all the other women of the land who will now start disrespecting their husbands and a new law is introduced.  Vashti is demoted and banned from the presence of the King, and a replacement is in the works.

Things learned from today’s study:   The Law of the Medes and the Persians, which is invoked in Vashti’s downfall isn’t just a one-time thing: it can never be altered.   It was that sort of unalterable law that got Daniel thrown into the den of lions in an earlier reign, even though the king at the time regretted it.   Ahasuerus created a new law to save face, and to ensure that every man, high or low, was the king of his own castle where the wife knew her place.

This has been used by some people as an endorsement of keeping women in a subservient position, another example of the need to take into account the context of what is being said, because “just because it’s in the Bible doesn’t always mean God endorses it,” said Reverend Jim.   Next week, the search for Vashti’s replacement is on and Esther, and the Jewish population of Persia enter the picture, and the role of God, who is not mentioned by name anywhere in the book, comes into play.

Anyone wanting to participate in the Wednesday Bible Study can contact Pastor Pot at pastor.jim.pot@rogers.com