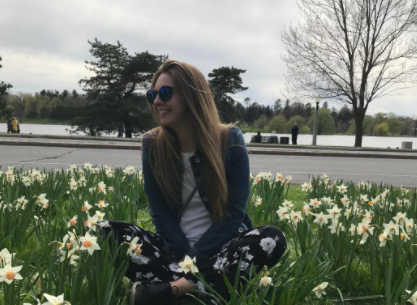 Knox Church is once again fortunate to have nabbed an intern who, while obviously young, is also educated both academically and personally. Knox regulars will have doubtless met or seen Meagan sometime over the last while working as part of the music ministry or perhaps assisting with the kids’ Sunday school-- although as in most every facet of our lives, Covid has had an impact on these areas.

Born in Calgary, Meagan and family moved to the Netherlands when she was just a small child, not that surprising given her family name is VanBlitterswyk. That has changed though: she’s now Meagan Chalupka, married to Kyle, another stalwart at Knox. Meagan and Kyle were married here just this past September. Meagan’s family returned to Canada after their time in Europe and settled in Brockville where she grew up and where her parents still live.

After finishing high school there, Meagan made the move to the nation’s capital and the University of Ottawa, first studying music and then, after five years at U of O, graduating with a degree in history. But through all this time, Meagan knew there was something else she had to pursue.

“I always felt that whatever I did in undergrad, I’d still end up working with kids and young people in some capacity.”

With that in mind, it was a return to the books, and enrolment in the three-year Child and Youth Care program at Algonquin College. This field of study prepares students to help vulnerable children, youth and families with complex needs. She’s nearing the end of year two and will receive the Ontario College Advanced Diploma upon graduation.

“This will give me the background I need to work in a variety of areas - schools or school boards, justice involved youth or maybe a hospital. This program really allows me to go in a number of different directions.”

Meagan’s past semester was all on-line but she was able to do a work placement at a school in town three days a week which is a real asset. She’ll be able to continue it in the New Year. Meagan started her Knox internship in the fall of 2021 and it runs until April. She’s been spending several hours a week in that role already. The workload varies but lately it’s been heating up.

“I’ve been doing quite a bit of work on the website, helping out with the Sunday school team and children’s time, and recently working with Simon and Caroline as part of the worship team, helping to organize the music and singers for Sunday. Simon is of course, Simon Pinsonneault, Organist and Choir Director at Knox, while Caroline Johnston is the choir’s lead soprano.

Music remains a passion for Meagan and she’s happy to be able to pursue it again as part of her internship. When she’s not attending classes, working on her internship, or toiling at her college placement at Our Lady of Mount Carmel school, Meagan says she likes to read and also enjoys embroidery.

Meagan and Kyle like getting outside whenever possible. In the summer, tossing the frisbee, going hiking, in the winter skating…“pretty much, anything just to get outside,” she says.

As far as the future is concerned, Meagan has another year in her program at Algonquin and then the job search begins in earnest. She’d also like to be back at Knox as an intern for another year if possible.

“Right now, I think we’ll be staying in Ottawa. It’s close enough that my parents can come up to see us quite easily, I’ve made some good friends here, plus Kyle’s teaching so we’re pretty happy right where we are.”

And Meagan can be pretty sure that the people of Knox Church would like to see her stay in Ottawa for quite a while longer as well.